After spending the weak thinking about it, I decided I didn’t give enough coverage to this issue last week and felt like it needed a second post. Last week I described the problem but I really didn’t go into explaining what a weaker brother actually looks like as well as some of the impersonators that are out there. The truth is, a lot of the confusion from this passage has been a result of changing the key characters. When we change the definition of the weaker brother to whatever is conducive for us at the time being, then we mishandle what God had intended for us to understand.

A True Weaker Brother is someone who has sensitivities to right and wrong on areas that are not in themselves issue of right or wrong. To these brothers we are to be sensitive and cautious. Our goal, however, should not be to leave them uninformed. We should work faithfully to be sensitive to their conscience and help them mature in their own faith. Being a stumbling block to them means suggesting or persuading them to do something that their conscience would not allow. If we get someone to do something they are convinced is wrong we have taught them a terrible lesson on how to harden their conscience. 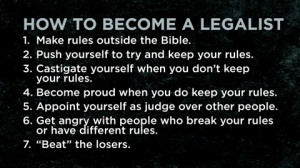 The Legalistic Weaker Brother is probably the most common impostor on issues of conscience. Legalism is anything that impedes the all sufficiency of Christ and His work. One of my favorite theologians, D.A. Carson, perfectly describes this in one of my favorite sermons entitled, That By All Means I Might Win Some. (You should check out the whole sermon in the link, but if you only have five minutes you should start watching at 18:00).

“Now this passage is often abused in some conservative circles. So, it’s less so today than 30 years ago, but today still in some circles, “I don’t think you should drink any alcohol and if you do, you will be offending me. So I Corinthians 8 says you mustn’t do it because you would be offending me.” Now most of the people who have said things like that to me really don’t have weak consciences. They’re control freaks. They’re legalists in the worst possible sense. And so I inevitably say in that case, “Do you think that no Christian can drink? That a person who drinks is not a Christian or can’t be a Christian? Do you think it’s essential to be a teetotaler to be a Christian?” And if they say, “Yes.” I say, “Pass the Port!” And I’m not being a smart aleck. Because the Word of God will not allow anyone or anything to jeopardize the exclusive sufficiency of Jesus. It’s not Jesus plus being a teetotaler. Now, in fact, in this country I wander around as a teetotaler. When I go to France I’m not promising anything, but in this country I’m a teetotaler, unless somebody tells me I must not drink or I cannot be a Christian and then I will gladly have some Bourgogne. You cannot jeopardize the exclusive sufficiency of Jesus.”

Legalistic Christians are not weaker brothers, they are sinning brothers and they need to be confronted. Typically, good meaning Christians cater to the antics of the Legalistic Weaker Brother because they are good at heart and they don’t want to offend, but Martin Luther teaches us how we should respond in his work, The Freedom of the Christian.

“There are some who have no understanding to hear the truth of liberty and insist upon their goodness as means for salvation. These people you must resist, do the very opposite, and offend them boldly lest by their impious views they drag many with them into error. For the sake of the liberty of the faith do other things which they regarded as the greatest of sins….Use your freedom constantly and consistently in the sight of and despite the tyrants and the stubborn so that they also may learn that they are impious, that their laws and works are of no avail for righteousness, and that they had no right to set them up.”

If a legalistic brother attempts to judge you for what you do with a clean conscience, then they are sinning by judging you and therefore circumventing the very point Paul is trying to make in Romans 14:4, “Who are you to judge another man’s servant?”

The Professional Weaker Brother is the one who uses his weakness as his strength. The purpose of Paul’s writing about weaker brothers was so the church would learn to edify each other and build maturity. The Professional Weaker Brother has made his spiritual immaturity the standard for other Christians. Instead of allowing others to work out their own salvation with fear and trembling (Phillipians 2:12) the Professional Weaker Brother attempts to can up spirituality and make a long list of acceptable activities. This can easily be seen in the attempts of the early fundamentalists to draw lines on areas of art and culture. This is best described by Tullian Tchividjian in his book Unfashionable as he describes an encounter with a woman who was brought up within the fundamentalist movement.

“With tears in her eyes she told me about her strict, cold, Christian upbringing, which taught her that being different meant girls couldn’t wear pants, makeup, or jewelry, and guys had to have short hair and be clean-shaven. Guys and girls couldn’t swim together in the same pool, movies were strictly off-limits, alcohol was forbidden, and any music other than classical music and hymns was clearly ‘of the devil.’ And associating with anyone who broke those rules was a violation of Christian purity.”

This is not the standard for Christianity. The pillar for bringing genuine life to our faith is the individual struggle with truth. If we could can that all up and pass it down from generation to generation we would miss out on the essential necessity for each individual to work out their own faith. Though the Professional Weaker Brothers may consider themselves the watchmen for Christian morality, they are actually doing them a disservice by manufacturing it artificially.

Isn't this a double negative saying it is a bully zone?

The Illusive Weaker Brother isn’t actually a person you can put your finger on. People talk about this person when they don’t want to admit that they are the weaker brother, or that they are in fact legalistic. You’ll probably hear this ‘brother’ brought up in a phrase like this, “You can’t drink rootbeer because you don’t know who might see you and be tempted to sin.” These people typically mean well. They follow some of the points in Paul’s teachings: they are fully convinced and they don’t want to be a stumbling block. Where they deviate from Paul’s teaching is that they teach arbitrary truths as universally absolute and they assume their brothers are weak instead of following Paul’s principle in I Corinthians 10 where he says don’t ask if you don’t know. The problem with the Illusive weaker brother is that they don’t teach the full countenance of Scripture. They take what they like from the passage and disregard the rest.

These people are often functioning under the sin of the fear of man. When we live our entire Christian life worrying about what we might do to cause someone else to stumble or what we might do to offend them, then our spiritual endeavors tend to become egocentric instead of Christocentric. Paul doesn’t want us to live this way. He wants to free us with Christian liberty. That is why Paul is writing about this in Romans 14-15 and I Corinthians 8-10.

The truth is, we really aren’t teaching people how to love the weaker brother. What we’ve done is take Paul’s teachings and turn them into law. Paul is not teaching law, but love. Paul is not teaching restriction, but freedom. If we really want to learn how to love and edify a weaker brother we have to be willing to come back to the text and understand fully what Paul intended from the context. We can’t just manipulate it to fit within our preferences.

So, if anyone tells you that what you do offends them then they are admitting one of two things: They are a weaker brother or they are legalistic. There really isn’t any other option. If someone does confront you on an area that is not defined absolutely within the Word of God, take them to the gospel and teach them about the all sufficiency of Christ. This is conduct worthy of the gospel.

“Having a good conscience, that when they defame you as evildoers, those who revile your good conduct in Christ may be ashamed.” I Peter 3:16

Check out this article from Parchment and Pen written by C Michael Patton entitled, Beware of the “Professional Weaker Brethren”